We would like to inform that during "Reality Dream Tour" you can purchase in our "live shop" the special limited double cd (vinyl replica) and the vinyl itself (both hand numbered), with the show recorded in May 2008. So, be prepared! :))))

Although at the moment we are not able to give you the exact date, the premier of the fist DVD of the band is getting really close now. We are doing our best, but unfortunately the realization and production does not depend on us.
Reality Dream Tour will be full of other attractions such as: visualizations, new t-shirts designs and, who knows, maybe something from the forthcoming ADHD?

The special guest of the tour’s European part will be a promising band from France: Lazuli

Below you will find the detailed tour plan:

Between the concerts, preparing live DVD and realizing some solo projects, the band has already started to work on the material for the newest record.
Its title will probably be “Anno Domini High Definition”. This record is planned to be the most energetic of all those released so far. Soon, there will be a separate column added to our website, where you may learn about the process of its production.

The band will start to record in January 2009 and the release is planned at the turn of May and June 2009.

Mariusz Duda, Riverside's singer and bass player, together with fellow musicians, has just finished working on his solo album, "Lunatic Soul." The release date has been set for October 13th, 2008. The album will be released on the British label - Kscope, known for having released the earlier albums of Porcupine Tree, and presently producing Anathema and No-Man. In Poland on Mystic Production. On the Lunatic Soul album you will find 10 atmospheric tracks making up 47 minutes of music.

Mariusz Duda: "I touched upon a vital subject on this record, namely... death. What came out of this was a conceptual journey to the world beyond full of reflections on transience and all we may want to leave after we pass (if we want to leave anything). In the sphere of music, it will be intriguing. I would call those sounds oriental-alternative, not really having anything in common with progressive rock. An interesting fact is that there is no electric guitar here at all."

You can listen to some fragments of Lunatic Soul music at: www.myspace.com/lunaticsoulband

We would like to remind you about two upcoming festivals:

We'd like to invite you to a few concerts in May which will hopefully warm you up before one of our most important gig on May 17th in Łódź we're going to make our first official DVD summarizing the "Reality Dream" trilogy.

Apart from the above concerts, we're going to perform at a few festivals :)

It is with a great pleasure that we would like to inform you about our performance at the 12th edition of Baja Prog Progressive Rock Festival in Mexicali, Mexico. After performing at the East Coast of the USA, it's time for the sunny California! We're playing this Wednesday, March 26th, 2008. Keep your fingers crossed!!! :)))

For some of you we have quite interesting news. This year we're planning to record our first DVD. The show will be 17th of May in Lodz (Poland) in TV studio "Toya". Of course the show is not only for polish fans, so we invite you wherever you live :) More information soon.

We'd like to invite you to the first leg of the tour promoting our latest release, "Rapid Eye Movement".
Here are the details:

We already know the official release dates of the new Riverside "Rapid Eye Movement" album. The last part of "Reality Dream" trilogy will be released on Inside Out label on the 28th of September in Europe and on the 9th of October in the USA. Naturally, we're planning to go on tour again and we'll let you know about the details soon. 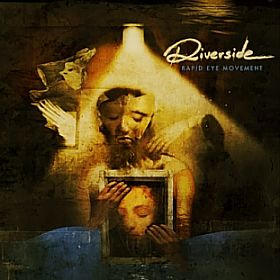 And here are the titles of the tracks on our new album:

6. Through The Other Side
7. Embryonic
8. Cybernetic Pillow
9. Ultimate Trip 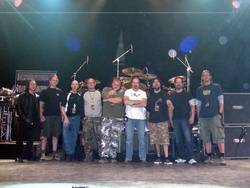 We realize it's been over 2 months since our last piece of news but recent weeks have been filled with intensive work and tremendous stress. After coming back from the tour with Dream Theater (you can expect some photos from it soon), we immediately went back to the studio to finish working on "Rapid Eye Movement" album. Now it's time to play some more live shows for you:

We'd also like to invite you to visit our MySpace profile where you can listen to the track 02 Panic Room, which promotes our new release.

It's a pleasure for us to announce that Riverside will be Dream Theater's special guest at some of their European headlining shows on Chaos In Motion - World Tour 2007:

In June and July Riverside will also perform at a few festivals in Europe. More details in the "concerts" section.

Towards the end of June, the band is planning to release a single CD "02 Panic Room" with the title track and compositions which will not be released on the upcoming album. The single will be available at a more than reasonable price. The band's very first videoclip, "02 Panic Room", will also be created.

We've already started working at full steam on the new Riverside album. These days, we're finishing composing the new material and we're about to enter the studio. "Rapid Eye Movement," for this will be the title of our release, will be the most oneiric part of "Reality Dream Trilogy." Once again, there will be nine compositions (3 x 3), and the graphic design will again be created by Travis Smith. The scheduled date for the release is September 2007 on Inside Out label in the world, and on Mystic Production in Poland.

Some of the new compositions will be presented soon during three Riverside gigs:

You're all kindly invited!

More about the new album, reports from the studio etc. will be published soon on our website. 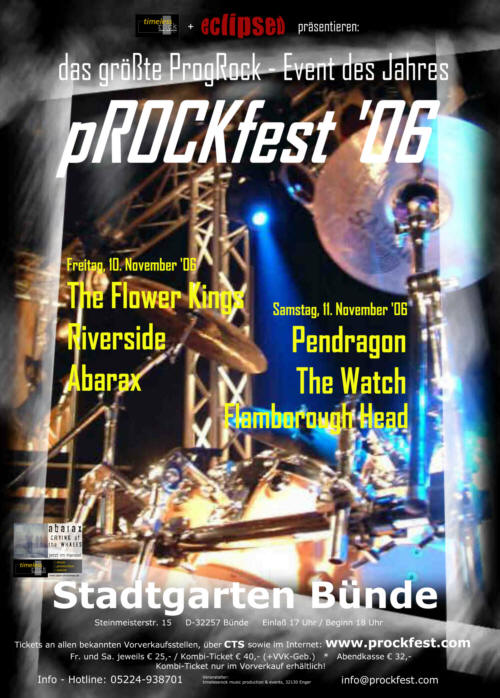 Our last live act planned for this year will take place at the Prockfest in Bunde, Germany. We hope that it will be a good ending of this year, which was devoted to promoting "Second Life Syndrome". The festival will take place on October 10th and 11th in Stadtgarten Bunde, and the schedule is as follows:

Good news for all those who want to see us live once more or for the first time - we will be promoting Second Life Syndrome again in September and October.
And here is the detailed list of the gigs we have planned:

09.09.2006 - Rock Against Terrorism Festival - Warsaw, PROGRESJA (PL)
You can buy the tickets in Traffic and Hej Joe in Warsaw, and also
here.

01.10.2006 - ProgPower Festival - Baarlo, JC SJIWA (NL)
We're happy and excited about performing at ProgPower Festival again. We're also really touched because it was at that festival two years ago when we began touring outside of Poland. We're coming back there on October 1st as the headliner. It makes us really proud. Thank you!!!