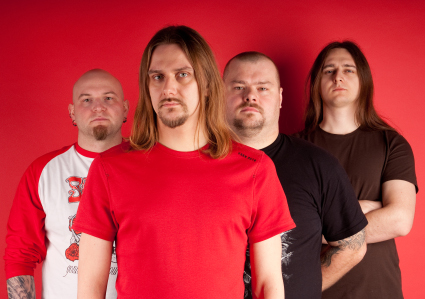 Inside Out ADHD biography - here

In a society which continues to develop at breathtaking speed, racing through world history in seven-league boots, mercilessly trampling down anything unable to keep pace with this ruthless goose step, Riverside have composed an album which is a perfect reflection of our times. An offering full of symbolism – starting with the fact that the title of their fourth release consists of four words and that the album is precisely 44:44 minutes long – and an intelligent stocktaking of reality. Anno Domini High Definition is no concept album in the classic sense, although it features a central theme and a haunting message. “It’s a story about people who angrily state that such-and-such a device is no longer fashionable, before they`ve even learnt how to use it properl themselves. Even worse – it’s no longer usable, because there’s something better on the market now”, Mariusz Duda, vocalist, bassist, guitarist and lyricist of the four-piece explains. “For me, those are the thoughts of people who wake up every morning worrying that perhaps today their ‘sell-by date’ may expire.”