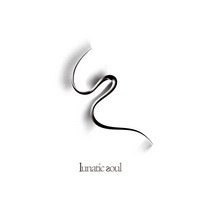 Mariusz Duda is currently composing the material for the new Lunatic Soul album. This time prepare for a "white album."

"Since the beginning I've seen the two first albums as a diptych. The white and the black piece. No album titles, just the name and the logo. The black album is a passage to the side of death, and the white one is a passage to the side of life. I see the cover as a negative reflection of the debut album. Right now I'm in the middle of composing new songs, so the winter scenery outside is very welcome."

The "white" Lunatic Soul or "Lunatic Soul II" is going to be - assures Duda - an album "full of mysterious atmosphere, weird sounds and sophisticated instruments. An attempt at agreeing between good songs and open form and experiment." He adds, "now more than ever I'd like to use my voice in a non-standard way."

The names of the other musicians and guests working on this project will be known soon. The second Lunatic Soul album will be again recorded at the Serakos studios in Warsaw. It will already begin in February/March this year. The expected release date is autumn 2010.