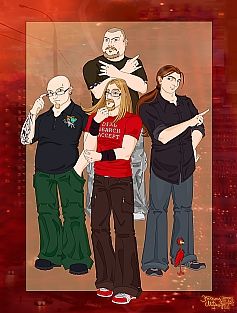 2009 was one of the most intensive (if not THE most intensive) years in the band's history. First of all, the new album "Anno Domini High Definition" that appeared for the first time on foreign sales charts, in the Netherlands and Germany among others, and in Poland reached the first place of OLIS sales chart, after what it became gold. Second, the concerts promoting the album, gathering the biggest audience in the band's history, both in Poland and abroad (e.g. only at 6 ADHD concerts in the Nethelands and Belgium 3000 people came to see us live. On the whole tour - over 20 000). Third, "Reality Dream DVD," recorded in May 2008, summarising the Reality Dream trilogy, finally with the image.

All of the above happened thanks to joint commitment of people supporting us, our friends and fans, whom we would like to thank cordially and hyperactively. You are great and it is thanks to you that we are able to move forward constantly. However, this year we are planning to slow down a bit in order to charge our batteries. But not for so long as to let you forget about us :)

We will let you know about our nearest-future plans very soon.